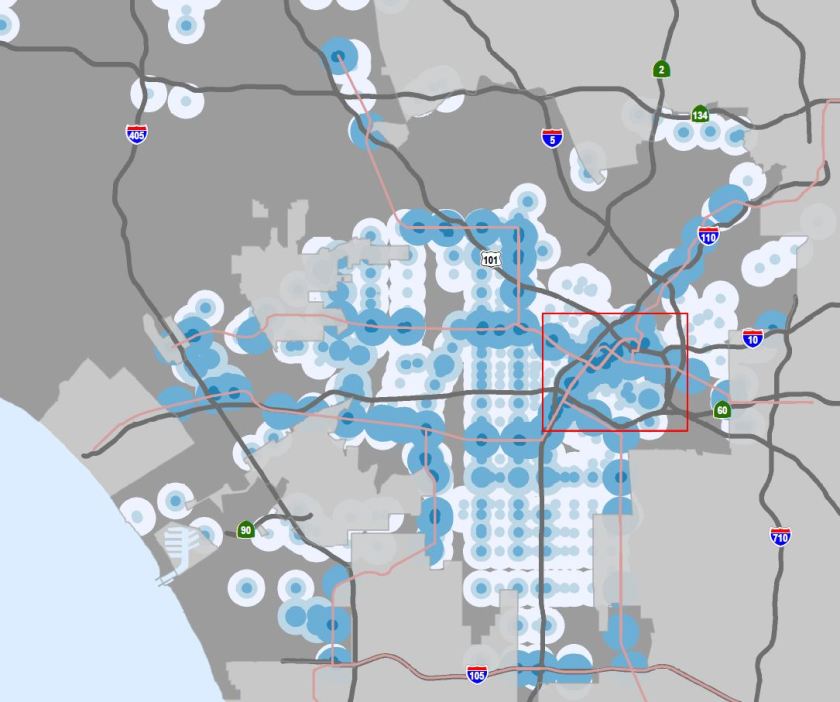 This has been a project I have worked on for most of this year and it has been very exciting to see it become a reality. With the rising housing costs in Los Angeles, it has been crucial to develop initiatives that spur more residential housing development.

This program can be viewed as a super Density Bonus, which is an ordinance that allows for increased density in exchange for the provision of affordable housing. Affordability is defined as 30% (very low), 50% (low), and 80% (moderate) of the area median income. Though the program is limited to a half-mile radius around Major Transit Stops, as defined by the California State Public Resources Code Section 21064.3, many developers are excited because this new program allows for the possibility of a density increase up to 80% off the base zoning, along with a variety of incentives such as reduction in parking and increase in floor area.

There are four Tiers of TOC areas, based on distance from and type of Major Transit Stop: regular bus, rapid bus, and rail. In addition to drafting the program, I developed the prototype maps earlier this year before leading our department’s GIS Division’s efforts to create the official reference map with the data uploaded to our public zoning information portal, ZIMAS.

Based on my analysis and the program’s provisions, only around 13% of the City’s total land is eligible for this program and only 42% of that land has access to the full range of incentives. This small number is partly the result of the still developing public transit network in the city and partly due to restrictive zoning (a majority of the city’s land is zoned for single-family residences). Hopefully, with a greater population being housed near quality transit through this program, the city can accelerate its efforts in creating more transit options.

In this view, TOC not only will affect the housing market, it will hopefully allow Los Angeles to become more sustainable by increasing demand for better and higher quality public transit.

*The following are my views and mine only. I do not claim to represent the views of the City of Los Angeles Department of City Planning.

As an aside, since TOC is based on Density Bonus, the same supply-side arguments apply. The basic idea is that by increasing the housing supply, the market will adjust accordingly and result in lower housing costs. The required affordable housing is an added bonus to the city’s housing affordability. Though in reality, these initiatives typically increase the property values of the lots affected and there are strong arguments that precisely due to the increased value, supply–side solutions actually lead to higher housing costs. This is a philosophical debate for another time. For now, let’s rejoice in the passing of a policy initiative that is sorely needed in a city with some of the most illogical and restrictive zoning.