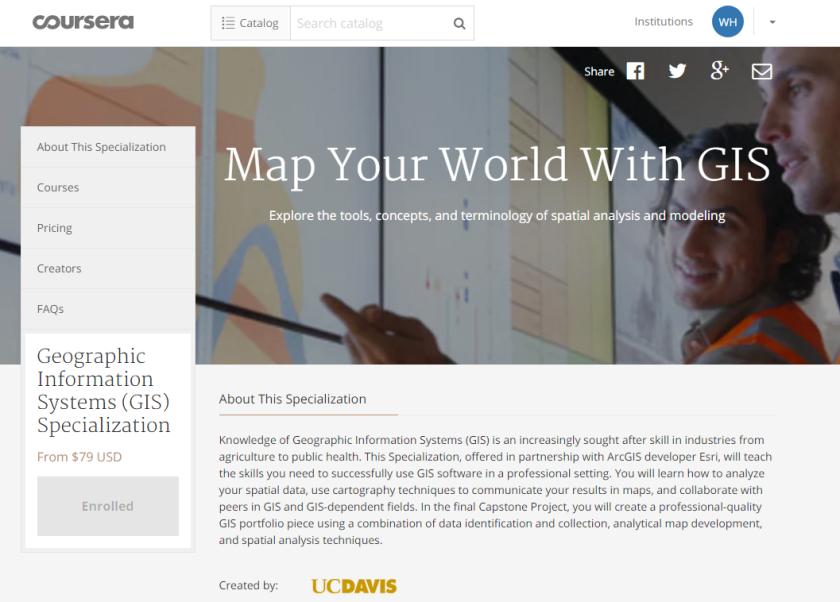 On February 22, 2016, I started the GIS Specialization Course with UC Davis through Coursera. For those of you who have paid attention, I have started the final course of the specialization: Geospatial Analysis Project. As with other Coursera specializations, this is a Capstone project that is the culmination of the previous courses.

For this project, I have to propose, design, analyze, and present a geospatial analysis project from start to finish. This week requires the creation of my project proposal, which is as follows (if any of you have suggestions on data sources and/or analysis, please feel free to comment):

What is Density Bonus?
Density Bonus is a program through which a developer can apply for a project with a unit density greater than that allowed by the current land use zoning, as calculated from unit floor area and floor area ratio (FAR). In exchange for the higher density, the developer must set aside a certain number of units to be affordable: this is by restricting the rent levels or sale prices to targeted income levels based on the Area Median Income (AMI). To facilitate and to lower the costs of these projects, the developer is granted between one to three development reliefs, based on the percentage of affordable set-aside, such as parking requirement reduction and increase in building height.

Background Information
In January 2005, SB 1818 which amended the State of California’s Density Bonus program became effective. This change in policy mandated that local jurisdictions must bring their ordinances into conformance with the State requirements. Until local jurisdictions are able to update their laws, the State policy applies. The City of Los Angeles enacted its version of the Density Bonus program in February, 2008. In other words, from 2005 onwards, Density Bonus has been in effect in Los Angeles. Around 620 projects (based on data up till mid-September) has been recorded and entitled by the Department of City Planning. Furthermore, year-to-year there has been a steady rise in the number of applications which illustrates the growing popularity of this program.

As the U.S. economy continues to recover from the 2008 recession, Los Angeles has been facing a growing housing crisis and greater development pressure. Density Bonus has become a way to fast-track housing development in a city where the zoning is often very restrictive. With the City’s own Density Bonus program nearing a decade of existence, it becomes imperative to understand if these new projects are built where needed and if these projects are in fact contributing to greater housing equality.

This project proposes to 1) locate where Density Bonus projects are being entitled and 2) analyze the demographic and physical conditions behind those applications.

Research Question/Hypothesis and Expected Results
For this project the research question is where are density bonus projects being proposed and what are the underlying demographic and physical conditions of their locations?

Despite the affordability requirements, the expected result is that density bonus projects will likely be located in higher than average income areas with better public amenities, such as transit and parks, as they provide for greater return on investments.

Entitlement data is typically made available through public requests to the Department of City Planning, while GIS data on city boundaries, transit stops, and parks are freely available through the GIS portals of the LADCP, Metro, and LA County.

Overview of Data and Sources:

Method
The planned method of analysis will require several steps:

With years available for the entitlement data, this analysis can be performed for every year, starting from 2005, to evaluate changes in development project trends. One of the challenges of this project will be joining the points data and the polygons data to create products with meaningful indicators. In many ways, this project is the reverse of a site suitability study: this is an attempt to deduce the considerations behind density bonus projects.